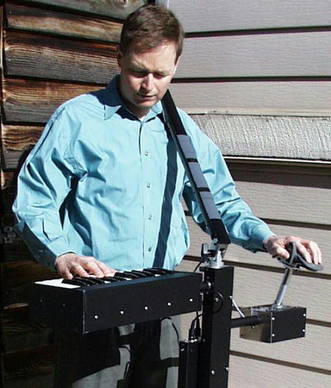 The aXiØ
alternative eXpresssive input Øbject  (1993-2001)
The aXiØ is a new electroacoustic instrument/controller which gives the musician a broad range of expression and multi-dimensional control of MIDI synthesizers and samplers. It was designed and built by Brad Cariou at the University of Calgary and conceived to provide digital artists with the intimate control and flexibilty needed to express themselves in various new media. Using a Macintosh computer running MaxMSP, it is completely user-programmable.
The aXiØ has a cross-like structure and stands about body height, vaguely resembling a stream-lined robot. It is played with both hands on three distinct playing surfaces: a sophisticated joystick for the left hand, a velocity-sensitive keyboard for the right hand, and, running up the musician's shoulder, is an array of buttons used to change voices or trigger musical sequences, images or video. In performance, the right hand selects and plays the notes or events with aftertouch and pitch bending capabilities while the left hand provides more expression and transformation of the sound. For instance, the left hand joystick could be used to move a sound in space, to change its overall volume, to sustain a sound, to change its colour, and to do it all simultaneously in real time. The aXiØ has the potential to transform electroacoustic music from a predominantly studio art to a performance art.
​
Proudly powered by Weebly
UA-120140049-1